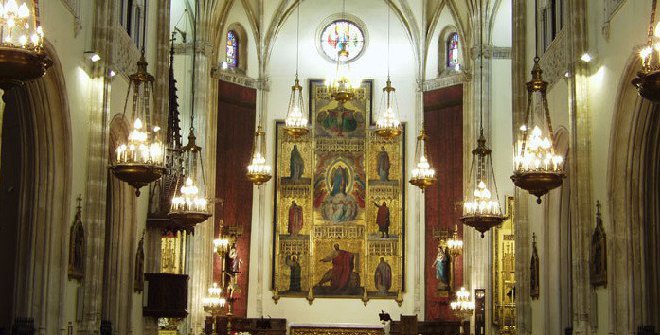 Magerit, ‘land rich in water’. This is how the Arabs called this area on the central plain of the Iberian Peninsula, close to Sierra de Guadarrama, where King Phillip II of Spain later established the royal court. Later on, it grew into the big city that’s come down to us.

The first historical record of Madrid dates back to the year 865, when Emir Muhammad I commissioned the construction of a fortress in the village of Mayrit, on the banks of the river Manzanares. ‘Mayrit’ means ‘plenty of waterways’, which is why the city’s first recorded coat of arms read, ‘I was built on water / My walls are made of fire / This is my flag and my coat of arms’. Madrid belonged to the Islamic world until 1083, when Alfonso VI of Castile took over the city.

Few vestiges have remained from this era. On Calle Mayor, next to the Institute of Italian Culture, there used to stand the Grand Mosque and, most probably, as in every Muslim city, the souk. On the site of the former mosque rose the Church of Santa María, of which some remains can still be seen. Close by, on Cuesta de la Vega, there’re parts of the old town walls that enclosed the medina or citadel. It was inside these walls that the Christians found a statuette of Virgin Mary with a candle that had been burning for over four hundred years at the time they seized the area. Almudena, derived from the Arabic al-mudayna that translates as ‘the little city’ or ‘citadel’, has been, since then, the name mostly used by Madrileños to refer to the Virgin.

In the Medieval district of Madrid you can go to the National Archaeological Museum, with a really interesting collection of decorative objects from the Visigoth Kingdom of Toledo to the Late Middle Ages. The rooms dedicated to Medieval and Renaissance art in the Lázaro Galdiano Museum and the Prado Museum are well worth a visit too.

Throughout the sixteenth and seventeenth centuries, Madrid was the capital of a huge empire; however, the buildings and landmarks didn’t truly reflect the city’s standing. The churches and palaces were built in a simple style that had little in common with ostentatious courts elsewhere in Europe. Austerity was the second name of the Hapsburg dynasty – or Austrias, as they were called in Spanish. Secluded in the Alcázar Real Palace, the kings rarely appeared in public. Meanwhile, Madrid drew writers, artists, fortune hunters and members of the lesser nobility who hoped to prosper in the court.

From that period, narrow, winding streets, mansions of unornamented severity and convents hidden behind high walls can still be seen in Madrid de los Austrias (Hapsburg Madrid). Between Cuesta de la Vega and Plaza Mayor, the heart of the city, you’ll find the traces of the old capital. Not a grandiose capital, indeed. The simplicity of its buildings, the lack of an overall urban plan and the huge number of churches surprised foreign envoys and chroniclers. On the western border, where the Royal Palace stands, was the Alcázar. This huge building, from which the world was ruled, burned to the ground in 1737.

On a stroll through this district you’ll see buildings from the eighteenth and nineteenth centuries that have no connection with the Hapsburgs but are of interest too, like the San Miguel and San Francisco el Grande basilicas or the Teatro Real opera house.

A good way to see Hapsburg Madrid is booking an official guided tour. 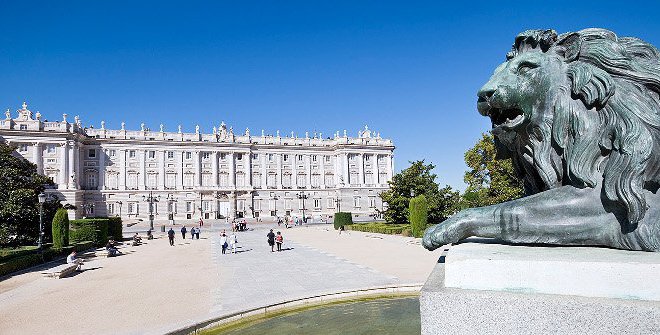 When Philip V, the first member of the House of Bourbon to rule as king of Spain, arrived in Madrid in 1701, the city was enclosed and criss-crossed by narrow lanes, filled with churches and austere palaces. From then on, the Bourbon kings would carry out comprehensive urban development plans aimed at adapting Madrid to the taste of European royal courts. They built fountains, gardens, triumphal arches, and the new Royal Palace, all of which helped change the appearance of the city dramatically.

Bourbon Madrid sprung up along the banks of the Fuente Castellana stream, where the present-day Paseo del Prado runs. In the seventeenth century, the aristocracy had chosen this area to build homes beyond the city’s boundaries. The Buen Retiro Palace, erected under Phillip IV, was the first step taken to turn the eastern part of Madrid into the most stylish side of the capital. However, it wasn’t until the eighteenth century that the Prado became the green boulevard lined with mansions that you can see today.

Also from Bourbon times are the Royal Basilica of San Francisco el Grande, with the third largest round floor plan in Christianity and an important collection of paintings; the Basilica of San Miguel, designed by Italian architect Santiago Bonavía and the burial place of composer Luigi Boccherini; the Church of San Marcos, with its characteristic design by Ventura Rodríguez; and the Convent of Las Salesas Reales, commissioned by Queen Barbara de Braganza to François Carlier as the place where she would retire in 1748. Currently the seat of the Supreme Court, the convent accommodates the graves of both the Queen and her husband, Ferdinand VI. They’re the only Spanish monarchs, along with Queen María de las Mercedes of Orléans, whose funerary urns aren’t in the royal pantheon at El Escorial. 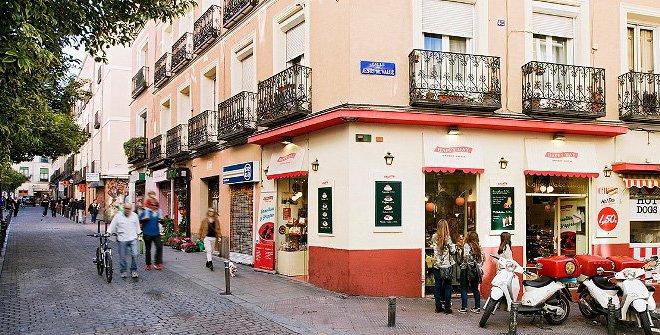 In the early 1980s, the Malasaña district witnessed the birth of the movidamadrileña, the underground movement that changed Madrid’s image for ever.

The story began on 9 February 1980 in the afternoon, when the auditorium of the Escuela de Caminos in Madrid hosted the tribute concert to Canito, drummer of Tos and Los Secretos, who’d been killed in a road accident on New Year’s Eve. Tos, Mermelada, Nacha Pop, Paraíso, Alaska y los Pegamoides, Trastos, Mario Tenia y los Solitarios and Los Rebeldes came on stage. Popgrama broadcast the concert on Spanish TV network TVE, and soon afterwards, all bands had signed contracts with different record labels. This was the origin of the movida, though the term didn’t emerge till later.

Today, you may still follow in the footsteps of the movida. It was the democratic transition that came after Franco’s dictatorship, and people were eager to try it all. The city saw an explosion of new artistic productions. Fascinated by Andy Warhol, David Bowie and the punk culture, youngsters believed that if you wanted to be a musician or shoot a film, all you had to do was get down to work. In Madrid, the statues in the Botanical Gardens were brought to life, as they do in Radio Futura’s song (‘La estatua del Jardín Botánico’), and everyone wanted ‘to die a little bit every day on Gran Vía’, just like in Tino Casal’s lyrics for the song ‘Que digan misa’.